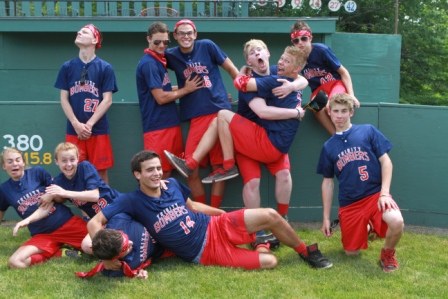 The Trinity Bombers have climbed into the top five fundraising teams for the 5th Annual Vermont Summer Classic.With only nine days to go before the tournament, team captain Nick Kolok has led the Bombers past their fundraising goal of $3,000 and are shooting for $4K. He thinks they’ll be formidable on the field , too.

“We made the playoffs last year as a wild card lottery pick, but with more teams, we don’t want to leave anything to chance this year. We’ve got to win two of our three games.

We picked up free agent pitcher Mikey Pascento in the offseason. He brings a lot of tournament experience having pitched in the Rhode Island and Connecticut tournaments. Our girls are great athletes, with Sarah, JoJo and top player Emily Boyle coming in from Manchester, NH to really bolster our defense. Marcus, Creighton, Jonathan and Jared can play well when they concentrate. We should get some run production from the Allen brothers, as long as Bradford “GQ” Allen focuses on eveything inside the foul lines.”

Vegas has the Bombers at 10-1 odds. Boombatz says: “The real strength on this team is the girls, and this kid Pascento. Kolok’s brought in some nice players, and he’s got a stick, too. But the bigger guys have got to produce, no doubt. Boardman’s got some speed, but they need Van Wyck to park a couple shots.”